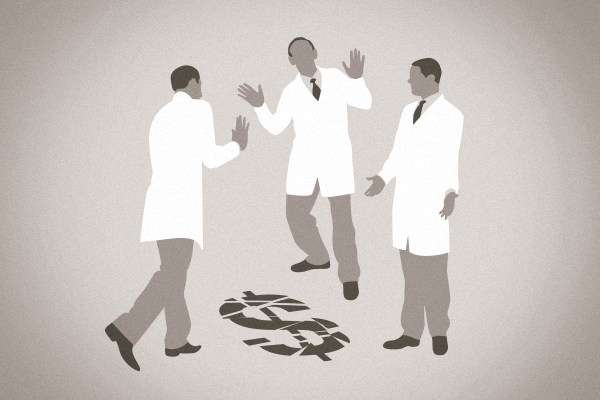 Are Doctors Passing The Buck On Healthcare Costs?

Eryn Brown of the LA Times posted an article yesterday claiming that physicians are concerned about skyrocketing healthcare costs. However, according to survey results released earlier in the week, most doctors don’t believe they have a “major responsibility” for reducing those costs.

In 2012, Mayo Clinic researcher Dr. Jon C. Tilburt and colleagues conducted the poll. They queried 2,556 doctors, asking them to rank their level of responsibility, as well as others’, for controlling costs. Over 50% of respondents said that the following groups had a major responsibility for cutting costs: trial lawyers, health insurance companies, hospitals and health systems, pharmaceutical and device manufacturers, and patients. A little over a third of the doctors surveyed said that physicians themselves had major responsibility. The LA Times reported that just over half of the doctors said they bore “some responsibility.”

Also included in the survey was doctor enthusiasm about various approaches to lowering costs. This included improving the quality of the data doctors have at their disposal to make better informed treatment decisions. This is one of those wishful thinking type conversations, though. Everyone knows doctors, especially in the fee-for-service model, have expressed dissatisfaction with their EMR. However, it’s also reasonable to admit that a doctor became a doctor to treat patients, not solve the problem of data organization. So while we’re glad to see doctors checked a box, that’s not the same as actively working to improve access to the information. In our case, we ditched the red tape of the established system and have created our own EMR that allows us to offer exceptional care to our patients. We might have had trouble taking this survey.

So did the survey address fixing these rising costs? Superficially, yes. The Mayo Clinic team wrote, “Respondents’ ratings for changing how care gets paid for were mixed.” However, they reported that less than 7% of physicians were against a “more substantial financing reform” like eliminating fee-for-service reimbursement. Although, as is the issue with surveys in general, this is a loaded question. They were not asked, would direct care benefit healthcare by providing patients with a more cost-effective primary care model? And, would this have a beneficial impact on overall costs?

The thinking is simple, but not contrary to our current understanding of economics, marketing, consumer psychology, etc. The thinking being that if people can get more for less, they will make that choice. If a provider can make more money, doing more satisfying work, a percentage of doctors (like us) will work hard to do so. The aggregate decisions can lower the market cost because consumers should theoretically choose the more valuable offer, and as the demand increases, more doctors should move over to meet it. Problem is that myriad factors can prevent this from happening: education, legislation and other complexities. One thing we should point out about that survey question, though– the wording. “Eliminating fee-for-service” sounds as dangerous to us as criminalizing direct care. Once the government steps in to make us do one thing or the other, inefficiencies are created, red tape is wrapped tighter and as we’ve seen in the past, costs rise.

According to The LA Times, University of Pennsylvania researchers Dr. Ezekiel J. Emanuel and Andrew Steinmetz called the physicians’ reported attitudes “a denial of responsibility” in a related editorial. They wrote that most doctors got enthused about the cost-cutting efforts that “relieve the physician from being the decision maker.” They went on to add, “If there ever was an ‘all-hands-on-deck’ moment in the history of health care, now is the time … physicians must lead.” They then offered shameless insight into our human nature, adding, “Physicians are lapsing into the well-known, cautious instinctual approaches humans adopt whenever confronted by uncertainty: blame others and persevere with ‘business as usual.'”

And now you see why we’re fighting to educate people on real stories of direct care success. Not only does misinformation waylay our cause, but there’s also that thing called apathy. People close their minds and resist changing something everyone agrees is pretty broken.