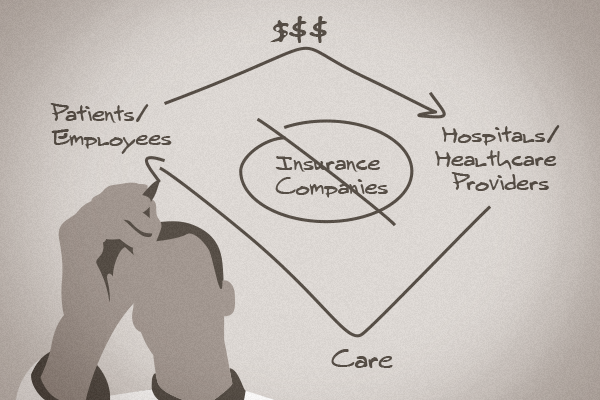 The Washington Post reported on a healthcare provider facing rising insurance premiums. Instead of passing on the price increase to their employees, who would begrudge the extra cost, MedStar Health decided to offer their own insurance plan that would cover employees at their hospitals and a small network of providers. This is revolutionary, as the article states, “All of a sudden, the health system did not just send out insurance claims — it also received them… Insurance plans and hospitals are typically at loggerheads. They squabble over claims that the hospitals submit and insurers sometimes deny.” Eric Wagner, a MedStar vice president, said, “[Health insurers] make their money by not paying for health care to be delivered. We make our money by delivering care. There’s always been a natural tension.” But now a start-up in Northern Virginia named Evolent Health promises to teach hospital networks like MedStar Health how to build a health insurance plan from the ground up.

And they’re off to a promising start, with more clients in the works. MedStar’s Eric Wagner stated, “By putting in the new health plan, we had the ability to give [employees] an option that actually allowed savings. People who enrolled in MedStar Select got a lower premium than they had the year before.”

However, hospitals do have cause for concern about patient reaction to a limited network. As we know, many hospital-run health plans went out of business in the mid-1990s. Patients rejected the bureaucracy and all the extra work getting special authorizations to see specialists or go outside the network. Wagner “acknowledged those pressures but contended that his hospital system would penalize patients only when they sought care that wasn’t necessary or could have been provided within the MedStar network.” He said, “You can’t ignore them. [However,] if you don’t need to go to the emergency room, but you go, and they send us a bill, we’re going to deny that bill. Every payer will, and we can’t be different from other payers. It’s not good for your health to get your care through the emergency room. That’s part of the signal we need to send people.”

And that’s a signal we’re glad to share. Because the insurance is coming from the same company providing the care, they’re taking accountability, which sounds like Richard Gunderman’s sentiment from his essay in The Atlantic: “People who don’t expect to pay the bill tend to disregard the tab.” Remember, we’re advocating insurance-free primary care and an expansion of insurance-free specialists. However, hospitals aren’t going anywhere, and our need to visit one is rarely expected. Insurance isn’t going anywhere either, hopefully just the middlemen who stretch profits by NOT paying doctors, NOT paying hospitals, while RAISING prices for their customers.

More Reading
“Is this the end of health insurers?” | The Washington Post