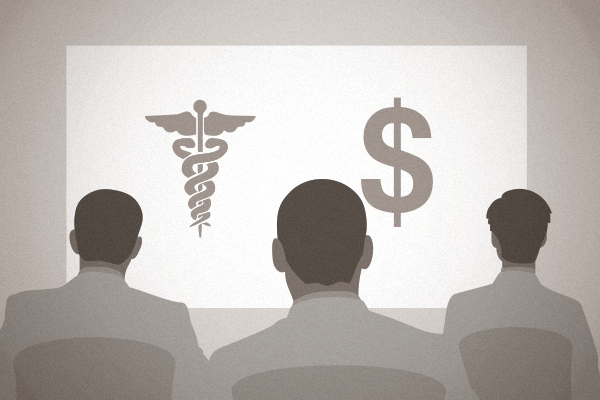 Here’s a home run for investigative journalism. The Washington Post dug around and found that doctors’ compensation is decided by a little-known committee of doctors who help establish the value of every procedure in medicine. However, critics claim the American Medical Association (AMA), the chief lobbying group for physicians, is the wrong organization to do the work.

This is a long form article, but we’ve highlighted the key takeaways in case you don’t have time to read the whole piece.

What is this group? How do they make up the prices?
Unknown to most, a single committee of the AMA meets confidentially every year to come up with values for most of the services or procedures a doctor performs. Those values are required under federal law to be based on the time and intensity of the procedures. The values, in turn, determine what Medicare and most private insurers pay doctors.

What’s the problem with this method?
Twelve colonoscopies along with four other procedures was a typical day for one doctor, according to Florida records, in 2012. Applying the American Medical Association’s assumptions about procedure times that much work would take about 26 hours. His typical day was about 9 to 10 hours. That is absurd. This group gets to meet secretly and determine how “valuable” procedures are thereby circumventing and distorting the free market principles which we believe could improve healthcare.

What did the investigation reveal?
The AMA committee, in conjunction with Medicare, has been seven times more likely to raise estimates of work value than to lower them according to analysis of federal records for 5,700 procedures by thePost. This happened despite productivity and technology advances that should have cut the time required (Now we’re doctors, not conspiracy theorists, but it looks like those poorfunctioning EMR machines are convenient for boosting work procedure estimates which in turn allocates more money to Medicare, a government program. That in turn makes it nearly impossible for doctors to collect. The question then becomes, where does all this money sit? Right. It sits within the government and not freely circulating between patient and doctor. Again, no need to go full blown doomsday ruin a dinner party but this data is indicative of the breadth of our healthcare woes.)

If AMA estimates of time are correct, hundreds of doctors are working improbable hours according to an analysis of records from surgery centers in Florida and Pennsylvania. In some specialties more than one in five doctors would have to have been working more than 12 hours on average in a single day — much longer than the 10 or so hours a typical surgery center is open. Florida records show 78 doctors — gastroenterologists, ophthalmologists, orthopedic surgeons and others — who performed at least 24 hours worth of procedures on an average workday.

What were some of the reasons for the problem?
Some former Medicare chiefs claim the problem stems from giving the AMA and specialty societies too much influence over physician pay. Hospital fees are determined separately.

“What started as an advisory group has taken on a life of its own,” said Tom Scully, who was Medicare chief during the George W. Bush administration and is now a partner in a private equity firm that invests in health care. “The idea that $100 billion in federal spending is based on fixed prices that go through an industry trade association in a process that is not open to the public is pretty wild.”

He said that, according to the Post, “every now and again, former Medicare chiefs — Republicans and Democrats — gather for a lunch and that, when they do, they agree that the process is, at best, unseemly.”

“The concept of having the AMA run the process of fixing prices for Medicare was crazy from the beginning,” Scully said. “It was a fundamental mistake.”

What’s the government doing about this?
Not much. The government has about six to eight people reviewing the estimates provided by the AMA, government officials said, but none of them do it full time. Even though the AMA figures shape billions in federal Medicare spending and billions more in spending from private insurers, the government is ill-positioned to judge their accuracy. Eight people deciding the fate of an industry affecting every American seems destined for abuses of power, in our humble opinion.

So what should a doctor make?
That’s a challenging question. The forces that normally determine prices — haggling between buyers and sellers — are only now being seen in healthcare through practices like our own. We’re still seen as radical though despite the common sense and simplicity of our approach. The problem is we are trying to make sense in a topsy-turvy system that’s plagued thinking men for centuries. In the end, procedure prices are hard to come by. Insurers do most of the buying and sick patients don’t get to shop around for care since they typically need it right when they need it having not had to think about it beforehand.

How did we arrive at this current pricing system?
At its inception the Medicare system paid doctors what was described as “usual, customary and reasonable” charges. But that vague standard was soon blamed for a rapidly swelling physician fees. In the late 1980s and early ’90s, the United States looked to a group Harvard intellectuals — professors, physicians, etc. — to develop a more structured system for paying doctors. What they came up with, basically, is the current point system.

How does this pricing system work exactly?
Every procedure is assigned a number of points — called “relative value units” — based on the work involved, the staff and supplies, and a smaller portion for malpractice insurance. Every year Congress decides how much to pay for each point. This year, for example, the government initially assigned $34.02 per point, though prices vary somewhat with location and other factors. Once the system developed by the Harvard researchers was initiated, however, the Medicare system faced a critical problem: Who will update the system as medicine evolves?

What’s the key takeaway?
This point system is critical in U.S. health-care economics because it doesn’t just rule Medicare payments. Roughly four out of five insurance companies use the point system for the basis of their own physician fees, according to the AMA. The private insurers typically pay somewhat more per point than does Medicare. When Medicare lowers their payments the private insurers are soon to follow.

The current set of values “seems to be distorted,” said William Hsiao, an economist at the Harvard School of Public Health who helped develop the point system. “The AMA fought very hard to take over this updating process. I said this had to be done by an impartial group of people. This is highly political.”

One thought on “SUMMARY: How A Secretive Panel Uses Data That Distort Doctors’ Pay”