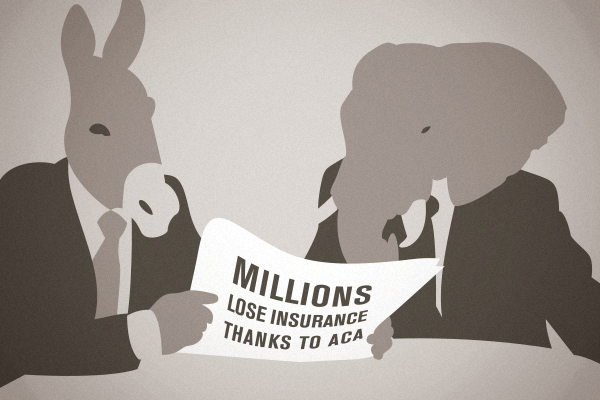 ACA Hysteria: Don’t Believe All The Hype (But Worry Nonetheless)

Michael Hiltzik from The Los Angeles Times wrote last week, “Obamacare’s critics are going to town on the cancellation letters millions of Americans are receiving from their health insurers…” This of course because of “healthcare reform” mandating that insurance plans meet certain requirements or be dissolved come Jan. 1.

Being as the President himself assured everyone that if they liked their insurance they’d be able to keep it, there’s obvious cause for alarm. Evidently, some people are especially bummed that they won’t get to keep their health plans that cost as little as $50 a month. Great price, right?

Well, sort of. Except that back in March, Consumer Reports published a study of many of these plans and placed them in a special category: “junk health insurance.” According to the Times, CR writes that some of these plans may be worse than none at all. Plans with monthly premiums in the two figures are marketed to customers in their 30s, 40s, or even 50s and invariably impose ridiculously low coverage limits. They’ve typically been pitched to people unable to acquire affordable insurance due to age or preexisting conditions, or those so financially strapped that the low price lures them in.

What these people don’t know is that they are paying for insurance that won’t even cover them when they get sick. Talk about a major fail. If Atlas MD, or any other doc in the direct care world, enrolled these clients, at least they’d have unlimited visits, access to cheap meds and assistance in finding a wrap-around plan that would cover them in an emergency.

Let’s take a look at the big difference between wrap-around insurance and these junk plans that Obamacare is rendering illegal. (Don’t take us for fools, we still believe free market forces should push this garbage out of existence; however, given the overwhelming power of red tape to manipulate it’s no surprise people have been conned into these plans in the first place. Our main complaint is that it should be entrepreneurial doctors who offer a competitive advantage that improve the situation, not MORE bureaucracy.)

This example comes from CR: A plan costing $65 a month is held by Judith Goss, 48, a Michigan department store employee. Goss is diagnosed with breast cancer. She discovers the drawbacks of the policy’s coverage limits of $1,000 a year for outpatient treatment and $2,000 for hospitalization. Wow! That’s barely enough to cover a day and half of Tylenol in the hospital. She delays treatment, so her cancer gets worse before she finally opts for surgery.

It’s these sorts of coverage limits that will be illegal come Jan. 1.

Prepare yourself for more media back and forth. According to the Times, the media might be misrepresenting some of the numbers regarding cancellation policies. The article explains the story of Diane Barrette in a bit more detail thanks to CR who dug up policy information refuting stories reported by both CBS and Fox. Basically Barrette is paying $650 a year to be uninsured. Her alternative? That will run about $591 a month if the insurance exchanges ever get working.

And while we appreciate the reporting and the alternative perspective, it still makes us feel like we’re between a rock and a hard place – red tape from Uncle Sam or red tape from the mighty insurance companies who don’t play fair. Once more reminding us that direct care really is made for the brave Davids of the world.

One thought on “ACA Hysteria: Don’t Believe All The Hype (But Worry Nonetheless)”