Quality of Care vs Third Parties. 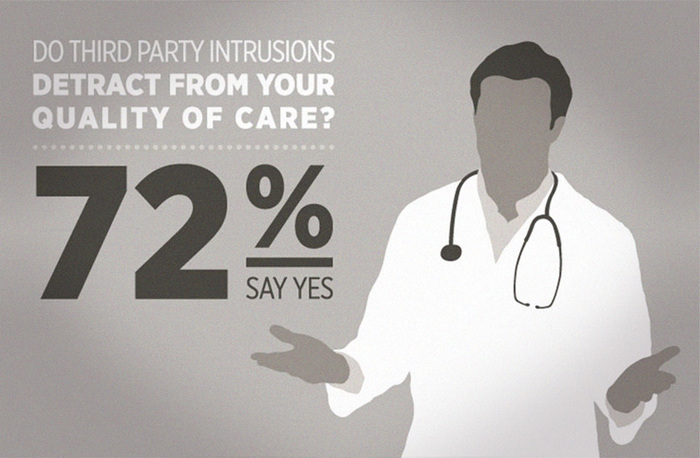 Third parties are supposed to be helpful. But when they’re not, the result can be incredibly detrimental.

This study from The Physician’s Foundation threw out a number, associated that number with docs who felt third party elements actually took away from their ability to provide quality patient care, and that number is quite staggering.

About two-thirds (72%) said third-party intrusions detract from the quality of care.

Without generalizing too much, it’s saying that pretty much everyone agrees with the whole “direct is better” concept. Think of it this way. On some level, we all want to pour a foundation for the next generation to build upon. To leave footprints in which others may follow, right? In the epic battle between quality of care and third parties, third parties are winning. So sad. But it gets worse. This study also says nearly half of physicians polled wouldn’t even recommend this profession to their own kids. Dang.

Enough with the depressing stats. Enough shattered expectations. Enough putting up with a system that breaks doctors. The story Direct Care tells is different. It’s one of hope. Passion. Freedom. Direct Care puts its foot down, and cuts out the middle man. You know, outside stuff that gets in the way of you doing your job. Direct Care essentially acts as a bulldozer for all those things. What traditional healthcare says is vital and can’t be worked around, Direct Care says isn’t more important than patient care. Forget about all the stuff that trips you up and leaves you wishing you had another 15 minutes to spend in the exam room. Or cursing at a mountain of paperwork every evening. Wait, wait. Shhh. Listen.

Can you hear them? That 72% who just heard that they don’t have to deal with third party anything if they don’t want to? They’re popping corks and throwing up confetti. They’re celebrating. Oh, we know how they feel. It’s amazing to know there’s a better way. To know that the alternative to your broken dreams are new dreams you never even imagined before. Not only helping patients on your time and their time at the same time (wrap your head around that one…) but not having to jump through hoops to do it.

Practice Direct Care. It’s the solution to third party madness, and it just might be the ticket to preserving a healthcare industry the next generation actually wants to be a part of.

One thought on “Quality of Care vs Third Parties.”