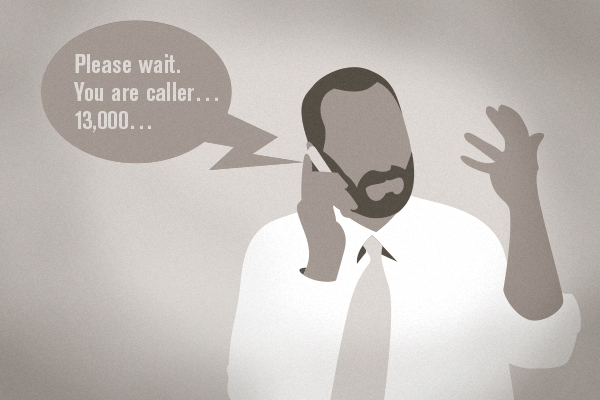 David Shaywitz Asks Healthcare Customer Service, Why Not Us?

David Shaywitz wanted to get a flu shot for his child. So he used an app to find a location. The situation went awry and he wrote about it for Forbes. He was misdirected to a location that could not vaccinate his children, and then got the “we’ll transfer you to so-and-so” runaround at his own doctor’s office, culminating in multiple visits and “you’ve-got-to-be-kidding”-length waits.

Through his unfortunate experience he made three brilliant observations:

Don’t confuse eHealth with health.
His experience with Health Map Flu Vaccine Finder was a total fail. He was directed to Walgreen’s, which had a horrible call gate that made it impossible to speak with a pharmacist. When he finally reached one, he was told, “Your kids are too young to participate.” This could have been communicated online. However, it wasn’t managed with any rigor or vigor, and up-to-date info wasn’t available.

Healthcare remains remarkably deficient in basic customer service.
It’s easier to speak to a mechanic, who works on cars, than it is to speak to a human being who TAKES CARE OF OUR BODIES. Obviously, society has its priorities straight (insert sarcasm).

Doctors are hoarding services they shouldn’t.
David says, “Ultimately, the answer here has got to be for doctors to better define and vigorously pursue what they are uniquely qualified to do.” We couldn’t agree more. That is WHAT WE ARE DOING, and WHAT WE ARE PUSHING FOR MORE DOCTORS TO DO.

We enjoyed David’s article. His third insight resonates with our group especially. We are not in the business of becoming the Costco of family medicine. We want to provide a service and receive payment for said service. And yes, we understand that certain regulations and compliances are necessary. No one wants to worry if their syringe is sterile. However, the frustrating part is the requisite paperwork necessary to do something as simple as administer a flu shot.

It’s a no-brainer why it’s so hard to get a doctor or nurse on the phone. And when you do, why they’re hurried. IT’S BECAUSE DOCTOR’S ARE BURDENED BY BEAURACRACY. This “burden” to serve patients is reflected in depressingly poor job satisfaction polls. Medscape says it’s hovering near 50%. That’s half, and that’s absolutely unacceptable. Providing vitality to fellow man should be imperative, an honor, not a begrudged assignment. Something’s wrong with this picture. Good thing David is asking the simple question: If other industries provide good service, why not us?

On a less related note, David’s inspiration for the phrase is cool. He was enamored with Boston’s support of their Red Sox in 2006. After 8 errors in their first two games, someone started selling t-shirts asking, “Why Not Us?” (referring to them going to the World Series). The shirts sold like hotcakes, and, you bet, the Red Sox made it to the Big Game. We’re inspired by these stories of determination and resilience. The problem is that Healthcare is way beyond 8 errors in our first two games. We’re looking at something more like trying to cram millions of people into Fenway Park—a crippling systematic failure—and we’re going to need a game changer to keep our country in top shape.

One thought on “David Shaywitz Asks Healthcare Customer Service, Why Not Us?”