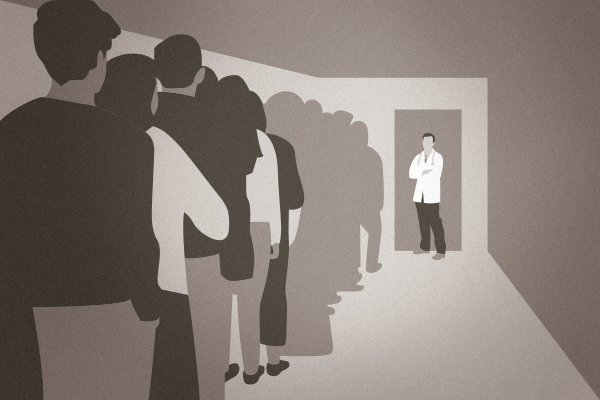 Dr. Doug and Dr. Josh have been spreading the gospel of direct care on Fox News, late night podcasts and CNN. But Concierge Medicine Today (CMT) has some data showing the downside in concierge medicine. They’re finding that the number of patients seeking concierge medical care exceeds the actual number of primary care and family practice doctors on the market.

“Despite what we hear in the media about the increase in concierge and private-pay physicians growing across America, there are simply not enough of these [concierge-style, direct care or membership medicine-style] physicians in the U.S. to meet the current demand,” says Michael Tetreault, Editor-In-Chief of Concierge Medicine Today “At the end of the day, the marketplace is still falling short.”

Rural areas have it the toughest. We take it for granted that a doctor can use existing income or loans to start a private business, and that they can enroll enough patients to keep the business operating till it profits. However, it’s proving difficult to accomplish this in areas like Idaho, North and South Dakota, Louisiana, Mississippi and others. This is a problem that will need a creative solution. What if a town is too small for a direct care doctor to have 600 people subscribing at $50/month? What if the town does not have enough disposable income because they are resigned to fixed income? Could a group of primary care physicians and specialists partner up to create a roving team of doctors that covers a larger region, perhaps increasing membership and keeping costs down? They could, but then same day visits might not be possible. Also, admin would be more challenging, though not impossible with the right EMR. Obviously, we don’t have all the answers, but are always happy to help passionate doctors figure out new solutions. However, we do know that as price transparency increases consumers will demand more affordable care. The question now becomes, will there be enough doctors to provide this care?

Either way, it’s going to come down to education. There are people who understand concierge medicine to be elitist, a problem tracing back to its origins as an extension of a service provided to The Seattle Supersonics, an NBA team. This “brand/identity” issue will need to be resolved with the public, with current doctors, and those in training. Already student groups are fighting to include free market principles in top notch med school curriculum and openly talking about direct care. The media is giving it national attention and extolling its common sense approach. However, concierge medicine (the most prevalent term) has been referred to as membership medicine; boutique medicine; retainer-based medicine; concierge health care; cash only practice; direct care; direct primary care, personalized healthcare, direct practice medicine and, most recently, contract carrying healthcare. That’s all kinds of names, for subtly different models of primary care, and that does not help us recruit more doctors, who might be confused as to what we’re doing exactly. It also doesn’t bode well if teachers don’t know what they’re training their students to do.

A Merritt Hawkins Study released early this year concludes that about 7% more doctors a year will expect to transition into concierge or private-pay medicine (at some point) but that a concierge doctor in every neighborhood is a long ways out. Currently, though, concierge medical physicians are retaining patients for 7 to 9 years, which is two years longer than insurance-based practices. Michael goes on to explain that when you stop providing “hamster healthcare” (compare that with our term, “patient factory”) you get happier patients, healthier families and less doctor fatigue. It’s no surprise consumers are demanding this style of care. It’s thorough, comprehensive, less stressful and affordable. Oh, and primary care doctors can earn more than their insurance-based counterparts [link to article about salaries and satisfaction].

In short, the answer to how we meet consumer demand for direct care is two-prong. We are going to need more doctors, period. And as price transparency continues, consumers are going to demand more direct care doctors. Education is an imperative, both about what insurance-free medicine is, and how doctors can practice it successfully. The more doctors who can transition to the model the better. After that, we’ll need to create new ones. For now we are spreading our message outside of academic institutions. However, it will need to be part of student curriculum sooner rather than later.